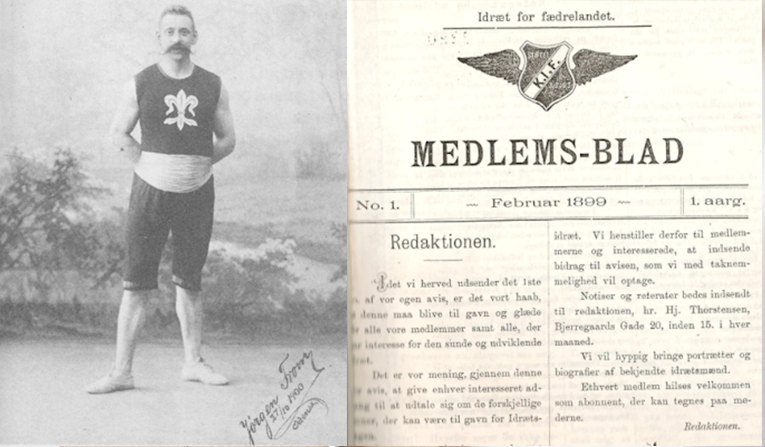 The year signifies the start of a growing interest in sports in Norway. Kristiania Idrætsforening (KIF), later Oslo Idrettslag, is founded the 3. of september, 1893 with the motto “idræt for fedrelandet” (sports for the fatherland). The teams logo is in red, white and blue, with the cities crest in the center of the logo. later the crest is replaced by the “viking”. Both motto and logo is an expression of the nationalistic and patriotic flows of the time, together with an ambition to build a grand team. The main sport of this team would be old athletics.

During the first years, Athletics consists of a wise variety of activities, such as gymnastics, boxing, wrestling and “schnitzelhunt”. KIF is participating in iceskating as early as 1894. By 1985 the team participates in “Bærumsrennet” and “nydalsrennet” on skis. Swimming, as a competitive sport joins the program within the same year. in 1895, theres also a speedwalking race, ranging 10 000 meters.

Competitions and demonstrations in swimming were arranged as early as 1895. In 1905, a swimming and lifesaving course was held. The course was split into two parts. One for those who could swim and one for thos who couldn’t. The participation exceeded expectations and, as a big finish they held a competition by the end. The exercises were 50 breaststroke, backstroke, diving and freediving. a grade was given in each exercise and James Wahlgren was chosen as winner.

The first Norwegian championship in swimming was held in 1911. John Johnsen from KIF won 4 of the 5 exercises that was held for men. the first King-trophy for swimmming was handed out in 1912, and John Johnsen won his first of 5 trophies.

OI celebrated their 100-year anniversary in 2010, and were in that occasion chosen to arrange “årsklassemesterskapet”, a championship for those between the age of 13 and 15. The championship was arranged at Norges idrettshøgskole (the norwegian school of athletics) and is currently the final of many national championships that OI has been part of arranging.